You do not desire a sacrifice, or I would offer one. You do not want a burnt offering.  The sacrifice you desire is a broken spirit. You will not reject a broken and repentant heart, O God.

Have you ever tried to make up for sexual misbehaviors by volunteering and giving of your time or money to a community or church cause? Though the sacrifice of time or money slightly helped make you feel better, it always seems to lack somehow.

King David wrote the words above after having been outed for trying to cover up his sexual misbehavior by committing adultery with another man’s wife.  He knew that no amount of sacrifice could make up for his wrong behavior.  The only thing that can help with how you may be feeling for your sexual misbehavior is to have a truly repentant heart.

A repentant heart is not the same as feeling remorse for getting caught.  A repentant heart is when your heart truly breaks in recognition of the wrongness in your behavior (whether you were caught or not). It is an acknowledgement that the behavior was and is wrong; AND a decision to not only refuse to repeat the behavior, but to also intentionally live in a God honoring way.

Today focus on your heart: is your heart full of remorse or repentance? If you are not sure or if you don’t know how to become repentant, ask God to give you a heart of repentance and to live in a way that honors Him.  Demonstrate your repentance by determining in your heart and mind to not repeat the behavior(s) anymore.

For I recognize my rebellion; it haunts me day and night.  Against you, and you alone, have I sinned; I have done what is evil in your sight.  You will be proved right in what you say, and your judgment against me is just. 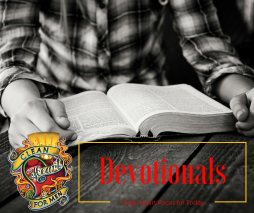 These words were written by King David after he had been confronted for his adultery with another man’s wife.  Many times when our sexual misbehavior becomes known to others, we feel embarrassed and remorseful for the pain we have caused others.  Though we hope for our friends and family to show us mercy and have compassion on us, deep inside we still don’t recognize our behavior as being wrong.

Many of us simply wait for time to pass and the normal routine to return.  Then we try to find a way to behave sexually in the same manner that had been embarrassing and caused our friends and family grief.  Only this time, we try to develop a better way of hiding our sexual misbehavior.

Focus on what is right in God’s sight when it comes to sexual behavior.  Sex between a man and woman who are married is by God’s design.  Any form of sexual behavior outside of this is not in God’s plan for sexual expression.

David acknowledged that his adultery was rebellion against God’s plan for sex.  He also stated that his behavior was evil.  The Evil One wants to steal, kill, and destroy.  Sexual misbehavior steals, kills, and destroys lives and marriages.

If you have been acting out sexually in a negative manner, admit the behavior is wrong.  Then  focus on behaving in the right way–A God honoring and pleasing way.